1898. HELP US SAVE AN AIRPLANE OF A BIG HISTORIC VALUE!


In Romania there still exist three Rombac 1-11 (romanian made BAC one-eleven) aircraft, left of the nine ones that were manufactured at the former plant IAv Bucharest, Romaero today. Two of them are in good shape, while the third one is only a wreck.
One of these two might go to the National Museum of the Romanian Aviation, the other is going to be recycled.
We, the Suntem România Association,  working along with the AirClub of Romania and the Romanian Aeronautical Association and we benefit of the support of the General-Lieutenant Engineer Cosmonaut Dumitru Dorin Prunariu and of the General Manager of the Romanian AirClub intend to exhibit this aircraft in a park in the city of Ploieşti, to maintain it and use it for a historic and educativeSuntem România  is a Cultural and Educative Association, legally established, aiming to protect, promote the Romanian technical, scientific and historic patrimony. 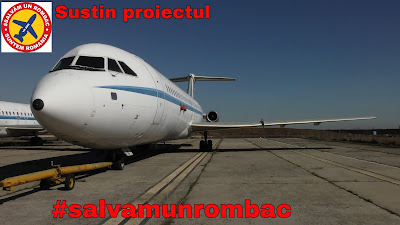 purpose. We mean to make the airplane the center of a museum exhibition of the Romanian Industry.
.
We have already drafted the project to dismantle, transport and re-assemble the aircraft on the future position, we still need the funds necessary to dismantle / transport / emplace / reassemble it.
Here is some information about these aircraft of which we intend and can to acquire one with your help.
.
Why are these airplanes important for the national cultural patrimony?
In the first place because they are the proof that Romania was one the very few countries of the world (the seventh, in fact) able to manufacture jet airliners. The seven ROMBAC 1-11 aircraft bought by TAROM are no longer located in Romania, except the first one, extremely degraded, with many missing parts (according to some information, it may have been used for the
training of the anti-terrorist troops). Losing them would lead to a situation similar to losing all the historical aircraft manufactured by the Romanian Aeronautical Industry which fought in the battles of the Second World War. As a matter of fact, none of the aircraft that took part in the campaigns of 1941-1945 was saved for the national patrimony (only two trainer airplanes of the time are preserved in the inventory of the Military National Museum).
Secondly, these two ROMBAC 1-11 are the only ones in the world adapted in the VIP configuration (the project was done by Romanian engineers). More than that, YR-BRI is the last of the 244 BAC 1-11 / ROMBAC 1-11 manufactured in Great Britain and Romania, which gives her more historical value.
In the third place, these aircraft are remarkably well preserved. Actually, at the moment, the two planes still have all the elements they were provided with by the manufacturers.
On our Facebook page, Salvam un Rombac, doneaza,  we mention all our activities for fund raising and going forward to attain our aim.


a.1 - identify the owner and contact him for starting the purchase negotiations - done
a.2 - analyze  of the exhibiting opportunities in different areas and spaces, indoor / outdoor, for public viewing, permanently supervised by different human and technical means as less financially demanding, but also easily accessible for controlled visits and presentations inside the aircraft -done
a.3 - contact the administrative authorities that hold the concerned space / location to obtain the location agreement and the necessary logistical support –done
a.4 - analyze of the technical-financial possibilities and requirements for the transport of the aircraft to the established-realized destination – done
a.5 - identify the certified economic agents for transporting and dismantling / assembly of the aircraft for its displacement and the start of technical discussions and financial negotiations with them –done
a.6 – corroborate all the technical and economic data of the project   requirements / needs until the completion of the project to estimate the total amount needed and to be presented publicly - in work
obtained from the owner, dismantler / assembler and transporter, so that it corresponds to everybody’s
a.7 - establish on legal basis the responsibilities of the anti-vandalization guard / administration / organization of the aircraft from the moment of taking it and starting its installation in the meant location – in work
b.  Set up fundraising for the realization of the project:
b.1 - meet the legal requirements in order to obtain donations and sponsorships according to the law – done
b.2 - identify and co-opt personalities and people, but also public entities related to the aviation / aviation industry, to become image vectors of the campaign – done
b.3 - photo and video sessions on the sopt with image vectors of the campaign, for the realization of the advertising materials and the started, in permanent function during the campaign.
start of the processing of the materials in the public mobilization of the population -
b.4 - founding a special page social media for information about the project and the actions taken to achieve it - achieved, in permanent function during the campaign.
b.5 - identify Mass Media representatives willing to promote and assist the project start-started, in permanent function during the campaign.
b.6 - identify a bank willing to host with minimal expenses or pro bono the accounts for donations of the project – done.
b.7 - organize a press conference in order to expose the project and the steps taken from it, so that the fundraising campaign is officially launched – in work
b.8 - contact as many companies - commercial companies - in order to sponsor the project. - in permanent function during the campaign.

The aircraft will be minimally technically equipped, noninvasive and invisible, in order to make it able to constantly host series of visitors, especially pupils and students who will watch programmed and controlled short video exhibits on the history of the aviation and of the aviation industry in Romania and to whom the aircraft will also be presented as material of study, especially those who attend aeronautics / aviation / pilotage.
The equipment will include air conditioning, functional lighting, LCD screens and PSI equipment.
At the same time it will be used as the centerpiece for various thematic events - "The Aviation Day" for example.

The project has as partners and supporters the following:

You can help this project by donate here: